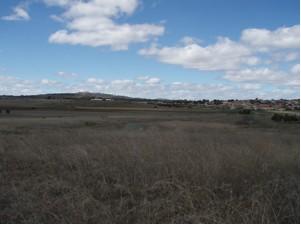 Jarramlee Offset Area, previously part of the Jerramlee property, is an area of 112 ha containing extensive areas of natural temperate grassland but also exotic pasture dominated by Chilean needlegrass. It provides extensive habitat for the endangered golden sun moth which feeds on both the roots of native wallaby grass and the Chilean needlegrass. The area will become part of Canberra Grassland Nature Reserve network.

On the north western boundary of the ACT, about 200 m to the west of Macgregor and Dunlop suburbs.

A long history of sheep, cattle and/or horse grazing. This is currently a grazing lease - but will become conservation reserve.

What to look for

Look out for the better areas of native grasslands with their variety of native grasses and wild flowers best seen in spring. Likely to see kangaroos. In the weeks before Christmas look out for male Golden Sun Moth seeking flightless female moths. Visitors may be fortunate to observe Canberra Raspy Cricket, Diamond Firetail, Little Eagle, White-winged Triller, Dusky Woodswallow and White-browed Woodswallow which are rare in the Canberra region.

Management includes fire fuel reduction, conservation oriented biomass control, weed control and erosion control works along Ginninderra Creek. A management issue is that 20% of area is dominated by Chilean Needle-grass (but this is important food resource for Golden Sun Moth). Threats include blackberry and Serrated Tussock which are also common. Overgrazing by a combination of kangaroos, rabbits and stock has been an issue during dry periods. Monitoring takes place of the Golden Sun Moth population and extent and quality of Golden Sun Moth habitat and Natural Temperate Grassland. Research has been undertaken into the use of Chilean Needle-grass by Golden Sun Moth and how to restore native grassland without impacting the moth; this also occurred in neighbouring West Macgregor offset area. The results found that Chilean Needle-grass supported the highest density of moths and the largest pupae. It also concluded that it was not practical to replace the Chilean Needle-grass, so that weed control is aimed as preventing further up-slope spread of this grass rather than controlling it on the creek flats, which support most of the Golden Sun Moths.

No dogs are allowed in the Area.